The 1960 Royal Variety Performance at the Victoria Palace was the first to be televised and will probably always be remembered as the Sammy Davis Junior show. "In eight electrifying minutes", wrote the Daily Sketch,  "this entertainer made the word 'star' seem inadequate".

Certainly the Queen had a breathtaking evening's entertainment. There was wonderful comedy from the Crazy Gang. who greeted Her Majesty in the foyer dressed as Yeoman of the Guards, Harry Worth, Charlie Drake,  Jimmy Edwards, Frankie Howerd and Bob Monkhouse.

There was stunning music from Ivor Emmanuel and the Pontcanna Children's Choir with songs from Wales. While, for the young at heart, the organisers had arranged a 'focus on youth' with Lonnie Donegan, Adam Faith and Cliff Richard (who had appeared in Manchester the previous year) and The Shadows.

With that galaxy of talent on display, it was a fitting first year for the Royal Variety Performance to be broadcast on television.

But it was Sammy Davis' night. "To say he stopped the show", said The Stage, "is an understatement."

In fact, it was such an understatement that for once protocol went unheeded and he had eight curtain calls!  Those 'in the know' were no doubt aware that curtain calls are not usually part of the Royal Variety Performance.

The Royal Variety Shows must always go on - even if there is a bomb scare! Tow hours before the performance there were reports of an unexploded bomb in the locality. This immediately brought fears of a last-minute cancelation. But, with just a short time to go before curtain up, a bomb disposal unit declared the area safe....and the hugely successful show went on.

Having come straight from a rehearsal in Cambridge, Jimmy Edwards was slightly disorientated and unaware that he was due for a full dress rehearsal. He telephoned home, giving instructions concerning the items he needed, "I want the hunting gear, dear, straight away"  he told his wife. "We don't need the breeches - that's the joke apparently."

The finale to this year's show promised to be one of the most spectacular of all time. The entire company, some two hundred in number, were to join the Crazy Gang in Strolling,  and dressed in tails and top hats, they emerged from all sides on to the stage. The effect was spell-binding, but not without its backstage hitches.

Liberace and Robert Horton experienced some difficulty getting into their tails and only made it to the wings appropriately attired thanks to the timely intervention of Peter Prichard (one of the Grade's senior agents), who happened to be passing their dressing room when he heard cries for assistance. This, incidentally, was the only occasion when Liberace appeared on stage in anything other than his usual dazzling wardrobe.

Sammy Davis Junior was less fortunate with his tails. Although ably assisted by his manager, he could do nothing about the dimensions of the suit, which was several sizes too big! His top hat presented the greatest challenge and the star of the night found himself on stage with the head-band padded with tissues in a lame attempt to keep the hat in place! All was well until it came to the National Anthem, when hats were removed. Out flew the tissues and sailed into the stalls!

If that wasn't bad enough, when the hats were put back on at the end Sammy Davis, to his chagrin, felt his slip down right over his face as the audience, who had restrained themselves commendably until then, slowly dissolved into helpless and uncontrollable laughter. 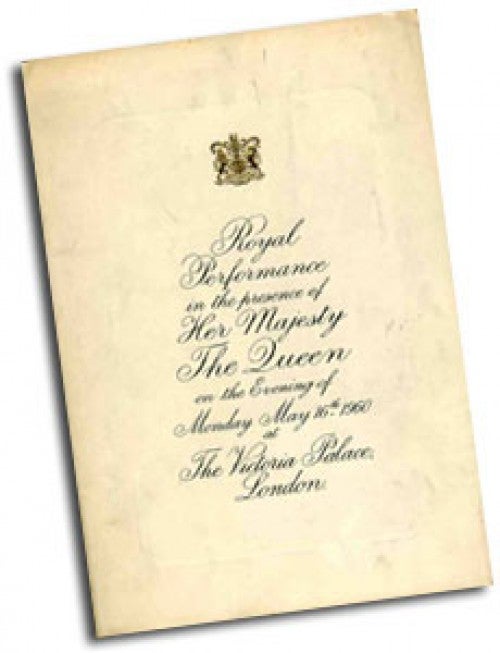 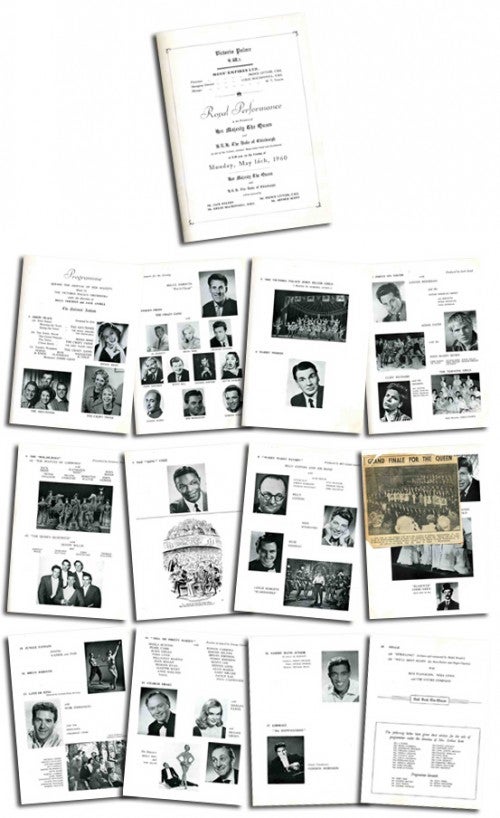