On December 4th 1907, The Music Hall Artistes’ Railway Association (MHARA), who offered reduced fares and other benefits to its members, proposed at its General Meeting, that a levy of one shilling be introduced with its annual subscription, to be used to begin a benevolent fund for the benefit of its members and fellow artistes.

This nucleus of funds was to be supported by many other sources including voluntary contributions, odd charity matinees, the proceeds of the Annual Dinner, and from collections on passenger liners to and from America, South Africa, and Australia by artistes travelling to and from engagements. Thus relief to performers from hardship, or ill health, could be available in many ways, including weekly pensions, grants, loans, funeral expenses, and finally for admittance to a Home for entertainers, who through old age, were unable to continue to earn from their livelihood.

This was the original conception put forward by Joe O'Gorman, but the idea of a Home for old performers, of both sexes, was also suggested by Joe Elvin of the Grand Order of Water Rats, in 1908. He had promised personal friends financial assistance if the scheme was approved by the profession. This was publicised in the professional papers of the day, and at the annual dinner of the MHARA, the idea was received with great enthusiasm and a considerable sum of money was immediately pledged. Shortly after, a committee was formed comprising of delegates from all the professional entertainment societies and various projects were devised in order to raise the additional finances required for the project.

At a General Meeting of artistes held at the Old Empire, Camberwell, the details of the project were unveiled and additional monies subscribed, until nearly £2,000 was raised. Architects’ plans were acquired for a proposed building and the estimated costs were set at £7,000, a huge sum of money in 1908. Joe Elvin generously promised to donate £500 for the purchase of some land, and a fête was held the following July, but owing to terrible weather conditions, the fund raising event made a considerable loss. Further unforeseen circumstances caused a lack of interest and enthusiasm, and Committee meetings were abandoned for a couple of years.

In March 1911, it occurred to the then Secretary of the MHARA, that it would be most unfortunate if £1,700 lay dormant at the bank, with little being done to set the scheme in motion and to carry out its original intentions. A Committee meeting was called and Joe Elvin was invited to attend. At the meeting, it was put forward that instead of building a new home, the money be used to purchase a property suitable for the intended purpose, within easy reach of Central London, and available for the reception of former artistes.

Joe Elvin promptly agreed and the Committee endeavoured to find such a property. After looking at several houses that were unsuitable, particulars of a freehold mansion, with five acres of land, near Twickenham in Middlesex, emerged. The property appeared ideal and Joe Elvin was asked to view the house; he was delighted with what he saw. Negotiations started without delay and in August 1911, the property was purchased for £2,400, £1,000 paid in cash from the Fund's reserves and the remaining borrowed in the form of a mortgage. An enthusiastic Committee commenced preparations for the house's occupation. It was apparent that extensive alterations would be needed, including the installation of a new drainage system; the work was carried out at a cost of £500. The question of furnishing the House, estimated at £280, also needed to be considered, and the amount was promptly raised by a special 'Sixpenny Fund', organised by ‘The Performer’ newspaper. All this work was completed within two months and the house was ready by November, 1911.

A reception was held at Brinsworth House attended by a number of leading journalists and numerous members of the entertainment profession. Joe Elvin, the founder, put forward a scheme suggested by W.H. McCarthy, also a Member of the Grand Order of Water Rats, that the Order establish a Society to be known as the ‘Noble Six Hundred’, which would consist of artistes and friends of the profession, each of whom would make a donation of £2.10.0 (£2.50) to raise the £1,400 required to pay off the Home's mortgage. By the following April, the entire amount had been obtained and the mansion and land became the sole, freehold property of the Music Hall profession. A board was erected within the entrance hall of the Home, with the names of all of the ‘Noble Six Hundred’ inscribed; it still hangs there to this day. By the end of November 1912, Brinsworth House had ten residents, including one married couple.

In 1912, The Benevolent Fund took over the existing Music Hall home at Gypsy Hill, where around 12 former artistes were in residence. It was decided shortly thereafter to house all residents, under one roof, at Brinsworth House, and in 1912, it was proposed that an extension to Brinsworth House be built. His Majesty King George V and Her Majesty Queen Mary agreed to attend a 'Royal Command Performance' at London's Palace Theatre in aid of the proposed plans. Frank Matcham, the eminent architect who had designed many of the leading Theatres and Music Halls of the era, generously consented to prepare the plans for the erection of the New Wing free of charge. The work commenced in June, and was completed by October.

Following the success of the Royal Command Performance in 1912, a further 'royal show' was produced in 1919 following the conclusion of the First World War. It was so succesful that His Majesty King George V decreed that the Monarch, or a senior member of the Royal Family, would attend an annual performance in aid of Brinsworth House and the Benevolent Fund, once a year thereafter. The Royal Variety Performance continues to thrive to this day and forms a major part of the entertainment industry's annual calendar.

Two new wings have been added over the years and Brinsworth House was honoured on both occasions by the presence of one of its most ardent patrons, the late HM Queen Elizabeth, the Queen Mother, who performed both opening ceremonies.

In 2015, the Benevolent Fund changed its name to the Royal Variety Charity. 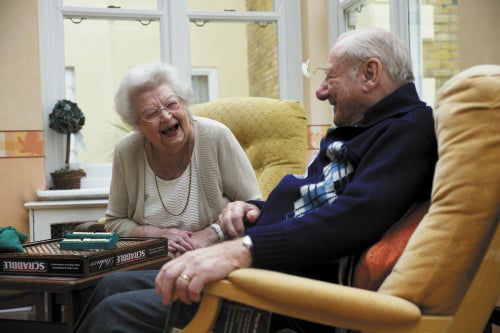 The entertainment profession has established a real 'home for its own' where its elderly can spend their twilight days in safety, peace, happiness and tranquillity. Brinsworth House accommodates residents within its 40 bedrooms and facilities.

However, the Home is only part of the work of the Royal Variety Charity. The charity continues to devote further resources to helping entertainers from all branches of the industry that still live in their own homes. The Royal Variety Charity operates a UK-wide grant system to assist those, who for whatever reason, have  fallen upon hard times, misfortune or ill health.

The text of this page is released under the Creative Commons Zero Waiver 1.0 (CC0). (http://creativecommons.org/publicdomain/zero/1.0/)