The 1957 Royal Varity Performance at the Palladium was evidence of the great range of the artistes and experience that the world of show business could draw on in a single night. Topping the bill was the American star singer Mario Lanza. And there were ‘veterans’ Vera Lynn, Arthur Askey, and the Crazy Gang too. But the show also featured up and coming talent, with Bob Monkhouse as compére, Tommy Steele and suffered somewhat from the tension as he admitted afterwards. ‘I was nervous. I went off and did my act, got off and was thankful.’

The year 1957 marked a particular milestone in the education of the young Prince Charles, for the autumn term he began his time at Cheam, complete with short and blazers.

Photographs in the papers the following day recorded the Queen’s uninhibited amusement at the spectacle. However, the BBC chose not to include the Cheam greeting in their coverage. A week after the show a spokesman explained, ‘It is not a ban. But the Item was not strictly part of the show.’

Dickie Henderson carried on a family tradition by appearing in this show thirty-one years after his father, the comedian Dick Henderson, who played at the Royal Variety Performance in 1926.

The other celebrated event in this year’s show revolved around top of the bill, Mario Lanza, who was appearing by arrangement with my brothers Lew and Leslie Grade. Working for the at the time was a young agent named Peter Prichard, who thirty years on is not only one of the leading agents in the profession today, but also the highly influential Treasurer of the Entertainment Artistes’ Benevolent Fund. Back in 1957, however, Peter was entrusted by the agency with looking after the stars like Mario Lanza.

Arriving at the Dorchester, where they were booked in for the weekend, Peter Pritchard was detailed not to let his charge out of his sight, since Mario Lanza was very on edge at the prospect of appearing before a live audience on stage.

To make him feel more comfortable, arrangements were made so that he could rehearse at the Palladium alone with the orchestra. The other artists were asked to remain in their dressing rooms, and the theatres was cleared of all but a skeleton staff. Indeed, Peter made every effort to ensure Mario Lanza the privacy he has asked for. What he hadn’t bargained for was a photographer who suddenly appeared in the dressing room and began to take pictures.

This was too much for the already highly-wrought star and this long-suffering agent was rewarded with a punch on the nose. Justifiably aggrieved at this, Peter nevertheless assented to Val Parnell’s entreaty to stick with the temperamental Mr Lanza and not to mention the incident to anyone until after the show the following day.

However, word must have slipped out from some other source, and in an attempt to confirm what had happened, the press rang Peter’s home, where his grandmother, who knew nothing of what had happened at the Palladium, took the call. In one of the most memorable quotes in the long history of the Royal Variety Performance, she answered the question as to whether Peter had been in a fight with the comment, ‘Oh, very likely, He’s always getting into trouble with the kids around here.’

Her grandson’s response to being cited as still a ‘kid’ has not been recorded!

Not that that was the last from Mario Lanza. As he was being presented to Her Majesty the Queen and the Duke of Edinburgh after the show, His Royal Highness remarked pleasantly, ‘I hear you are on a European tour at the moment; I hope it’s proving successful.’

With a perfect parry Prince Philip replied, ‘Oh my story is about as interesting as my voice,’ and continued down the presentation line.

From "We're Having A Ball"

With The Kaye Sisters

And The George Mtchell Singers

Count Basie And His Orchestra

Ralph Reader And His Gang Show

Tommy Steele And His Steelmen 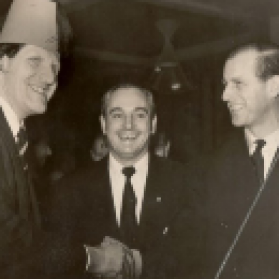 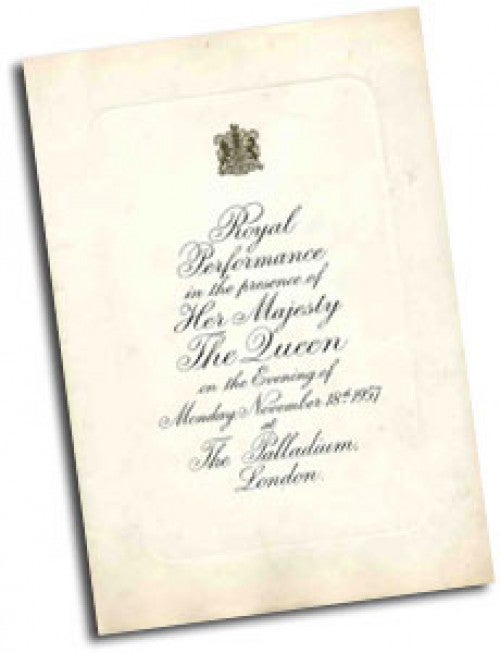