HER MAJESTY QUEEN ELIZABETH II
HRH THE DUKE OF EDINBURGH

The first of the two Royal Varity Performances of 1955 – and the first ever staged outside the capital – featured many acts familiar to Blackpool audiences. The organised Reginald Dixon who has become a popular resident in the Tower Ballroom was there, with the signature tune he made all his own, ‘I Do Like to be Beside the Seaside’. Jimmy Jewel and Ben Warriss delighted their fans as usual. From the Tower Circus came the Musical Clowns Charlie Cairoli and Paul, while George Formby and the American star Eddie Fisher added to the star-studded line-up, along with Arthur Askey and couple of young comedians by the name of Morecambe and Wise.

The highlight slapstick act of the evening belonged to the consummate comedians, Lauri Lupino Lane and George Truzzi, who treated the Blackpool audience to their celebrated paper-hanging routine. This was centred round two people trying to paste a piece of wall-paper on a wall with different coloured paste. The consequences can be imagined, and at the end of it both comics had to have a good wash-down before next appearing on stage. 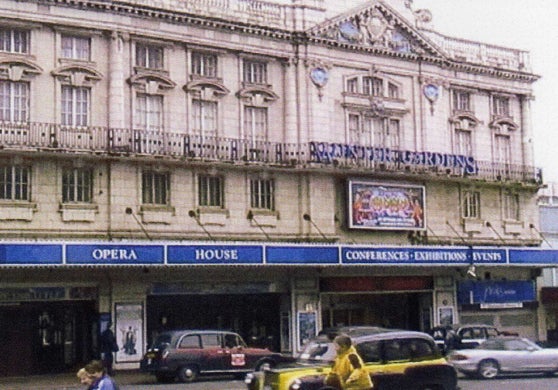