Her Majesty the Queen, the Duke of Edinburgh and Princess Margaret attended the Coronation Year Royal Variety Performance at the Coliseum – the Duke wearing horn-rimmed glasses for the first time in public. Invited to offer a professional opinion for the reason, a leading London oculist suggested, ‘It seems likely that the Duke may be suffering from a very common complaint – slightly short sight.’

The immensely successful production of Guys and Dolls was playing at the Coliseum at the time and several numbers were included in the programme resulted in some delicate changes to aspects of Guys and Dolls’ which it was felt might possibly cause offence in some religious quarters.

As Harry Marlow, secretary of the Variety Artistes’ Benevolent Fund, explained, ‘These performances attract people of all religions, and we do not want anything to offend.’

Thus, the Salvation Army uniforms in the show were changed on the night to skirts and blouses, the words ‘Save-a-Soul Mission’ were discreetly dropped and several other minor amendments were made.

The composer Frank Loesser, was slightly puzzled by the somewhat bizarre permutations. ‘There seem to have been some strange cuts,’ he commented. ‘While the word “heaven” has been changed to “judgement”, apparently the phrase “heavenly trip” is permissible.’

Over the years several commentators have observed that performance at Royal Variety Shows have perhaps lacked the uninhibited display seen by other audiences. If this is true, it merely reflects the very great care taken by the producers to ensure that nothing is admitted that could possibly be misconstrued. Perhaps Bud Flanagan expressed this understanding of the special status of the Royal Variety Performance most succinctly when he said after one show, ‘Protocol must be observed, and everyone on and off the stage must respect it. Whatever some stars may think of themselves, at a Royal Show the stop of the bill is the Monarch and we the artistes have the privilege of performing in support.

One of the most accomplished acts of the evening was that of Max Bygraves. The Stage said of him:’ among the newcomers to variety, outstanding is Max Bygraves, who was unknown less than ten years ago.

‘He has his own sense of comedy, which he is able to communicate in an individual way. He combines the stuff of music hall, everyday realities and a tinge of romance (which is usually sent sky-high with the flick of a hand or the turn of a lip), with a modern touch and a polish equal to that of any other artiste on the variety stage today, here or in America.

Donald Bamfort and Cynthia Brahms, two of the large Australian contingents in the finale, produced an act that turned out to be impractical as well as unusual. The couple, better known as Kenneth and Kathy Kanga, famous Australian comic characters, were at the dress rehearsal in their full-length kangaroo suits, and having found no seats available, came up with the pragmatic solution of sitting of their sturdy tails!

For comedian Jimmy Edwards this was his third Royal Variety Performance in three years. He took the opportunity afterwards to reflect on the problems of appearing in such shows. ‘It is a great worry and something of a risk,’ he said. ‘And sometimes I wonder what it is all about. You cannot help wondering if you can possibly succeed with this very difficult and unrepresentative audience. ‘No doubt there are lots of people out there who like variety and what to enjoy the show, but many have come simply because it is a Royal event.

‘In my opinion a Royal variety audience is extremely hard to please, one of the most difficult things being to adjust your act to the special atmosphere and relatively small amount of playing time.’

‘One step wrong at the start and you may be a flop. That has happened… the Press is eager to report all about the glamour and success of the evening, but it is also ready to pounce on failure.’

He added: ‘It is extremely risky to change your act and probably fatal to introduce new material. Better to stick to what you have been doing for a long and know inside out.’

There was a memorable finale to this year’s performance. With the Queen and the Duke of Edinburgh due to set off shortly on a tour of the Commonwealth, the stage was filled with people from member countries all over the world.

Stubby Kaye With Members Of The Cast Of Guys And Dolls.

With Members From The Corps De Ballet And The Empire Pool Festival Choir.

Eamonn Andrews And The Entire Company 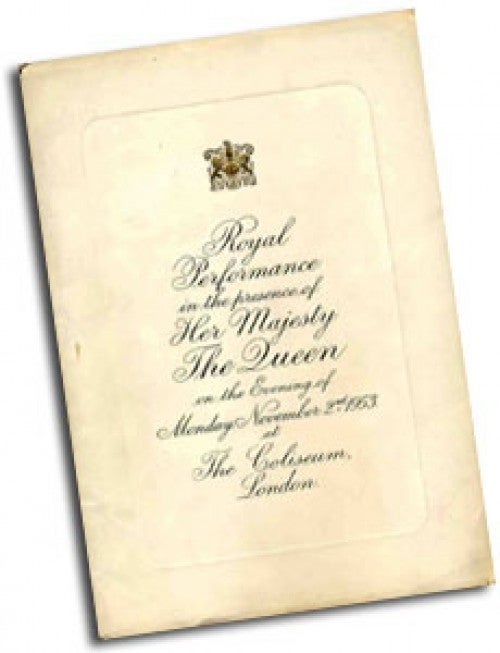 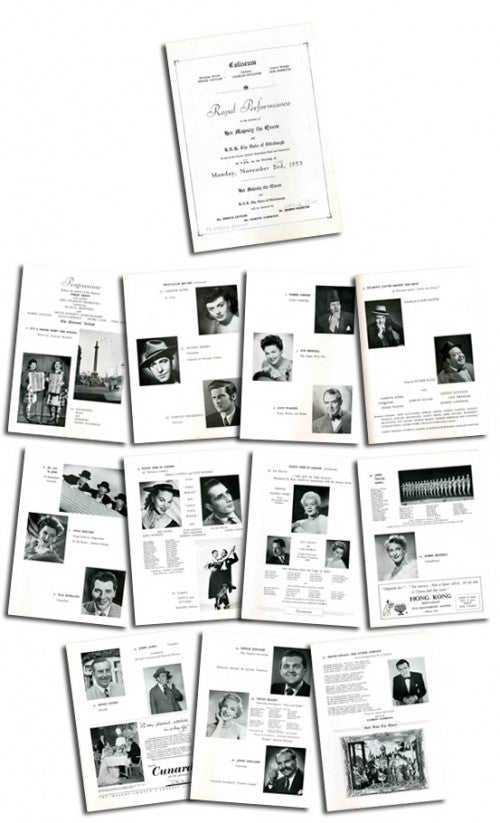