Laughter was the main theme of the 1947 Royal show at the Palladium. For the Royal Party it was already a happy occasion - the Princess Elizabeth appeared in the Royal Box with her fiance Philip Mountbatten and the romance of the occasion bestowed a special atmosphere on the evening. The cast list was virtually guaranteed to produce humour. They young couple were married two weeks later on 20th November 1947.

The famous duo Laurel and Hardy were over from the United States for the show; Tommy Trinder and the Crazy Gang were once more outstanding and there were acclaimed performances from impressionist Jack Durant and female impersonator and ventriloquist Bobbie Kimber - a man who confused some of the audience as to his real gender!

But 1947 did not lack song either, with Gracie Fields already a veteran of 'royal shows' getting an exceptionally warm reception.

The King was clearly tickled by the evening, "We haven't laughed so much for years" he said later.

Despite his acknowledged success with Royal Variety audiences, Tommy Trinder showed that performers can be very superstitious. During a rehearsal, somebody asked if they could photograph the comedian. Tommy immediately refused and ran away, saying "the hit of the Royal Variety Show is always a comedian who does not have his picture taken at the dress rehearsal. It was Arthur Askey last year."

Val Parnell, who presented the 'royal show' later explained the policy of including a few foreign big-name acts at the expense of some home-grown talent. "We try to show off our variety business to Their Majesties The King and Queen to the best possible advantage. We cannot afford in a performance like ours, when people are paying 10 guineas for a seat, to experiment too much! The audience of a Royal Variety Performance is 'hard boiled' and there's nothing worse than for an act to be received in stony silence. I don't say that variety is exactly on trial at the show, but it is a test performance and obviously, for the sake of the business, we have to put on the very best possible show."

Billy Russell was a comedian of great skill who did not fear the difficult first spot. His appearance and his make-up of large moustache, the unkempt clothes and his watch chain were more than enough to make his audience roar with laughter.

Irving Berlin's musical Annie Get Your Gun was taking London by storm in 1947 and Dolores Gray, star of the show, was invited to appear before Their Majesties. This called for split-second timing on her part. The moment the curtain fell on the evening's performance of Annie Get Your Gun, she had to dash from the Coliseum to the Palladium, arriving in the wings just one minute before her cue!

After over 40 years in showbusiness, Laurel and Hardy made their Royal debut in 1947 in a piece specially written for the night. Stan Laurel, a former member of Fred Karno's theatre company who had made his move to America along with Charlie Chaplin, was no stranger to the boards. Oliver Hardy had started out in theatrical management and played villains in his early films before teaming up with Laurel to form the most famous comedy duo in the world. Their appearance at the 1947 Royal Variety Show was a high point in the limited variety tour they made of England - a tour in which they were received with great warmth and enthusiasm wherever they played.

Mervyn Saunders, Mona And Oliver And The Girls 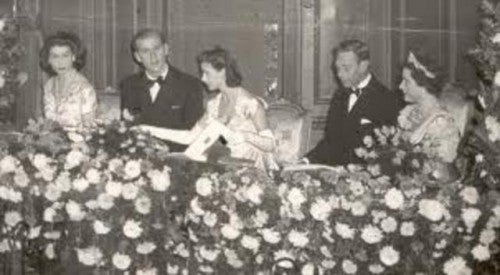 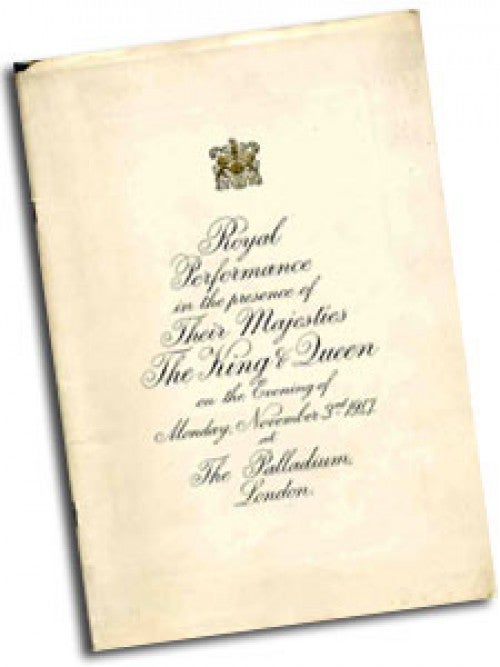 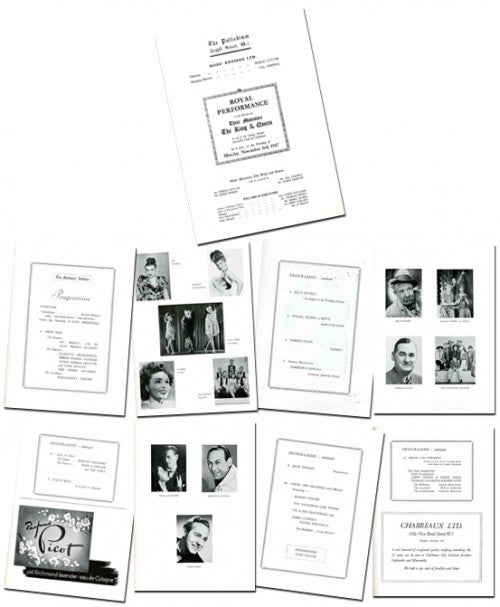