To celebrate Her Majesty The Queen's Silver Jubilee a Royal Gala Performance was arranged at the Palladium in 1977. For this special show Lord Bernard Delfont joined forces with his brother, Lew Grade, to create a programme with strong transatlantic appeal.

"Many of America's greatest artistes will be appearing in this unique Gala Performance"  they said in their joint message in the programme, "in tribute and salutation, from the United States of America, to honour the 25th anniversary of the accession to the Throne by Her Majesty The Queen. Fittingly, along with the American artistes, British stars will be appearing."

It was a big show in every way, with a star-studded line-up and a projected running time of four hours - twice the length of any previous show. Bob Hope was the perfect choice to play host for a night of truly royal entertainment.

Stars abounded, both animate and inanimate. The Muppets were a great hit, along with names like Rudolph Nureyev, Tommy Cooper and Julie Andrews.

Newer talents were also in evidence, among them Little and Large, Pay Ayres and the Brotherhood of Man.

One of the undoubted highlights was Cleo Laine, Johnnie Dankworth and the guitarist John Williams appearing together - a performance that was greeted with rapture by the audience.

The mother of the two brothers, Lord Bernard Delfont KBE and Lew Grade - Executive Producers of the show, was asked to present the bouquet of flowers to Her Majesty The Queen on arrival at the foyer. Their mother reputedly asked Reg Swinson (General Secretary of the Royal Variety Charity) what she should say to The Queen. Reg gently suggested "Just say Good Evening."  "But supposing the Queen asks me about my boys" their mother repeatedly asked!

Bing Crosby had been billed as joint compere with Bob Hope, but sadly he died just five weeks before the performance. Evidently affected by the loss, Bob Hope nevertheless went ahead with the show, and paid tribute to  'a man who meant an awful lot to me and awful lot to the world. He was the greatest entertainer of them all."

Kathryn Crosby, Bing's widow, was in the audience and stood up to take the tribute for her husband.

For this special occasion, Kermit the Frog was in a white tie, and bowed as low as amphibians can!

Miss Piggy came up with some memorable lines, such as "Kissy-kissy to The Queen" and was especially attentive to Prince Charles.

Well-received as Bob Hope undeniably was, his performance did not pass without some criticism. One reviewer noted that while his apparent ease and langour came over well on television, the theatre audience's view was often hampered by his cue cards! 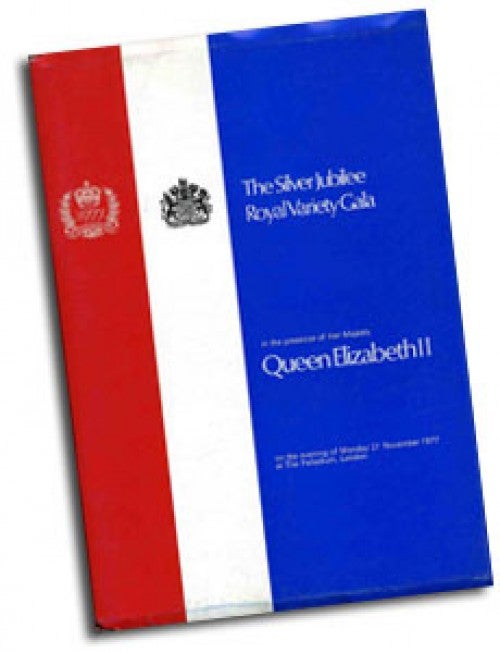