It was Billy's year as the incredibly versatile Michael Crawford, with other members of the Drury Lane show, won over the audience of the 1975 Royal Variety Performance at the Palladium. Crawford's talent and sheer ebullience certainly pleased the Queen and Prince Philip in an evening of wide ranging talent.

For sheer scale the splendour of the Kwa Zulu African song and dance company and the Rhos Male Voice Choir from Wales, who featured in the finale with Royal Variety veterans Harry Secombe and Vera Lynn, made magnificent entertainment. More music came from Count Basie and his orchestra and light comedy from the team of the television series, Dad's Army. One of the big hits of the night was the French singer, Charles Aznavour.

There was something of a furore over whether the female dancers in Kwa Zulu could appear topless as they did in their West End show.

What would the Queen think? Would she be offended? These questions were answered by a spokesperson from Buckingham Palace, very tactfully putting forward Her Majesty's reassurance that 'The Queen has seen topless ladies before.'

Michael Crawford made a death-defying entrance, traveling across the stage by means of a rope tied around one ankle. No wonder he was insured for £150,000 against accident!

Telly Savalas, tehacator best known for his role as Kojak in the American cop series of the same name was on the wrong side of the law for once. Mr Savalas was frisked by security guards before he was allowed into the building for his dress rehearsal. Perhaps they thought he looked like a suspicious character. Whatever the reason, it demonstrated the very strict security at the Palladium that year, following a number of bomb scares that autumn.

The lot of a producer of a Royal Variety Performance is not always the easiest - particularly when dealing with artistes from many different countries - and in 1975 Robert Nesbitt discovered that even the most innocent of observations can somehow become stretched out of their true focus. As with many of the artistes on the bill, he gave notes to Charles Aznavour who had sung three songs in rehearsal as he intended doing on the night. Robert felt that they all had a rather similar slow tempo and suggested that it might work better if the middle song was substituted with something slightly livelier, to introduce a fresh rhythm.

A fairly lengthy debate ensued, the result of which was Charles Aznavour agreeing to replace his second song with something a little quicker. What took Robert Nesbitt by surprise was report in one of the newspapers the following morning saying that the song had been removed because it had homosexual content that would not have been appropriate in front of the Queen- which wasn't an aspect of the number that had even entered Robert Nesbitt's mind.

Count Basie And His Orchestra

Dukes and Lee with the Trackers

Michael Crawford And The Company Of Billy 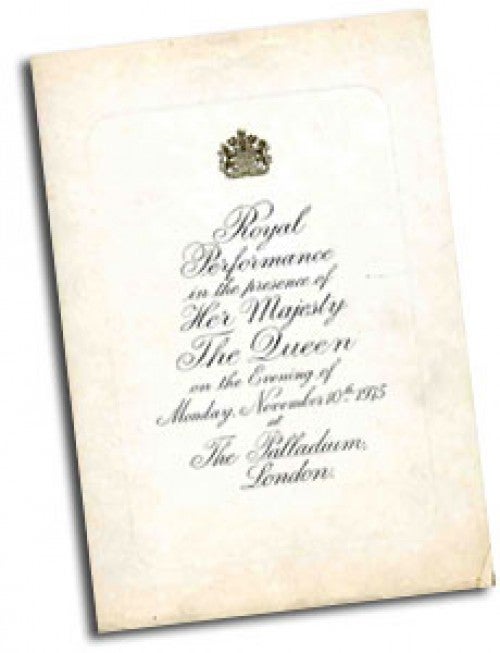