The Royal Variety Performance 1958 marked the first of the long-running series of Delfont/Nesbit productions and began the partnership that year at the Coliseum with a large and impressive cast.

With shows like Where's Charlie? at the Palace Theatre, My Fair Lady at Drury Lane and The Merry Widow at Sadlers's Wells there was no shortage of first rate material to draw on for the Royal Variety Show - and thanks to the revolving stage at the Coliseum it was possible to include a wide-ranging and impressive selection of numbers in the programme.

1958 also marked the highly succesful debut of Roy Castle, who was later to become such a big star of both stage and screen. 'he held the audience in the palm of his hand' said one glowing notice the following day,.

Under the polished compering of Max Bygraves - a firm Royal Variety favourite by now - there was plenty of other talemnt to draw on, includign Tony Hancock who appeared as a budgerigar in a cage above the stage! He was joined in the act by the much loved Hattie Jacques playing the bird's owner.

The finale was truly spectacular, with Rex Harrison, Julie Andrews and Stanley Holloway singing songs from My Fair Lady and ending with I Could Have Danced All Night accompanied by no less than three orchestras on stage conducted by Mantovani, Victor Silvester and Cyril Stapleton, with yet another orchestra in the pit.

An example of the careful scrutiny applied to material for any Royal Variety Show came from Norman Wisdom's rehearsal at the end of which he exited doing an eccentric dance step with the line "I'm trucking off" That was no sooner spoken than struck from the act on the grounds that it might be misheard!

Bernard Breslaw had a few uneasy moments with the protocol of the evening as well. A week before the show, he was told that he had been selected to be presented after the performance and would be expected to appear in tails. Now Bernard didn't possess a tail suit at the time and standing the best part of six foot five, he wasn't well placed to borrow one. The only option he had was to have one made, and the court tailors Kilgour and French agreed to have one ready for him in time. They were good as their word, but come the night Bernard was told that he was going to be presented in his stage costume after all, and his magnificent tails were denied their Royal Variety debut!

The inhibitions of the audience were nearly Tommy Steele's downfall. His surprise performance was almost literally a case of 'Singing the Blues' after his request to clap along met with a poor response. Luckily, the Queen came to his aid, clapping enthusastically and leading the rest of the house who promptly joined in.

Forty-six years after Vesta Tilley reputedly had Queen Mary retreating behind her programme, Hetty King, another male impersonator, was nearly changed at the last minute for fear of being a shade too outre. In the end the 70 year old artiste's act was allowed to remain intact. Dressed as a sailor and winking wickedly, she delighted the audience with her rendition of 'All the Nice Girls Love a Sailor'.

Anxious not to cause provocation by her distinctive way of signing, Eartha Kit said before the show, "I sure hope this performance goes all right. The last time I played before royalty - the King and Queen of Greece, in Los Angeles in 1953, I was nearly thrown out of the city! The major said I was too wicked and he said I was un-American!" Needless to say, her performance before the British Royal family was enjoyed by all.

"Night Of Nights" with

Talk Of The Town Girls And Boys

"Brothers And Sisters Of Variety" With

Cyril Stapleton And His Showband

Antonio And His Spanish Ballet Company

From "Large As Life" With

Victor Silvester And His Ballroom Orchestra

"Songs From The Shows" With 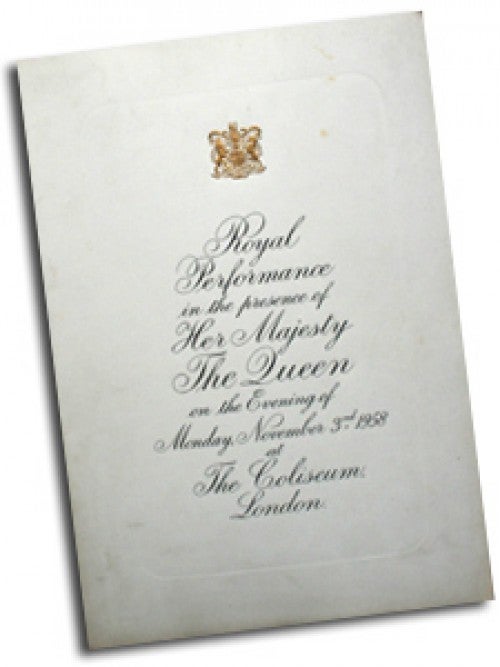