In a year of a Royal marriage – that of the King’s youngest son George, Duke of Kent to the lovely Princess Marina of Greece – there was a fittingly rousing Royal Variety show at the Palladium.

The finale saw the Coldstream Guards appearing behind parted curtains at the rear of the stage and they, fittingly, played the National Anthem.

It was the fifth consecutive year that George Black, had arranged Royal Performances at the Palladium; ‘each performance had seemed to be better than ever’ said The Stage.

Certainly, the King thought so. ‘A wonderful show, better than last year. It gets better every year. The finale was thrilling,’ he remarked.

The Three Sailors caused a great deal of mirth by combining their acrobatic skill with high comedy. The farcical misunderstanding only served to create more laughter, though underneath one knew that The Three Sailors had the situation more than adequately under control.

Arthur Lucan and Kitty McShane excelled in a domestic comedy scene in which Lucan played an anxious mother waiting for her daughter, Kitty McShane, to come home. The episode ended with a terrific fight in which every single piece of china on the set was broken.

For Richard Crean, safely restored to the conductor’s podium after his indisposition the previous year, the excitement of appearing in a royal show did not diminish. ‘I suppose I ought to be used to it by now,’ he admitted. ‘But every time the drum rolls and the Anthem starts… a thrill goes right through me!’

The Mill Brothers, featuring as part of Jack Hylton’s surprise offering, famed for their prowess at imitating musical instruments, created another ‘first’ for the Royal Variety Performance when they became the first black artistes to appear in the show.

The visual acts did not translate well over the radio – even with a compére to describe them. This is perhaps the reason why Elsie and Doris Waters were such big hits as their radio characters ‘Gert and Daisy’. Popular with their witty definitions -which included the description of golf as ‘a game where a ball is chased around by elderly gentlemen who are too old to change anything else’ – they also sang ‘Jogging Along’ and ‘Fed Up’ which pleased their radio fans as much as the Palladium audience.

They also proved themselves to be true professionals on the night. Coming on after Old Mother Riley and Kitty hand just finished their celebrated crockery-smashing act, Elsie and Doris found themselves obliged to perform against the background noise of broken china being swept up – a task that would have thrown many less accomplished troupers.

Mr George Black, who had by 1934 staged the Royal Variety Performance for a record five consecutive occasions at the Palladium, in that year looked back on the shows: ‘One of the striking features.’ He wrote, ‘has always been the way in which King and Queen have been quick to appreciate the homely, domestic jokes.’

The names of artistes to appear were always kept secret until after they had been submitted to Buckingham Palace, and Mr Black said, ‘Sometimes attempts to guess the names lead to much heart-burning and disappointment.

‘On one occasion a turn whose name had been given in one of these unofficial forecasts actually bought a new stage outfit, only to find, when the real bill was announced, that it was a mistake.’

Rehearsing was always a problem. ‘In 1931, when sixty-four girls were included in a dance scene, they were actually rehearsing under the stage while the show was going on.’

‘After I had seen the performance safely started, I went down into the rehearsal room below the Palladium stage, and there polished the big scene until a few minutes before it was due to go on.’

Mr Black described too how nerves could affect even the most experienced performer before a royal show. ‘One comedian a few years ago reached a stage bordering on nervous collapse. He was almost carried to the side of the sage and pushed on. He was one of the successes of the evening.’

‘Then there was a juggler who sat in his dressing room waiting for his call nonchalantly reading a newspaper. At least, so it seemed – until it was noticed that all the time the paper was upside down!’

JACK HYLTON AND HIS BAND 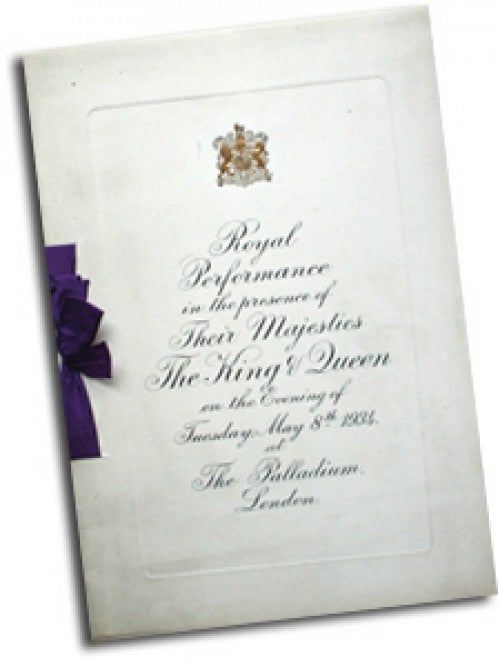 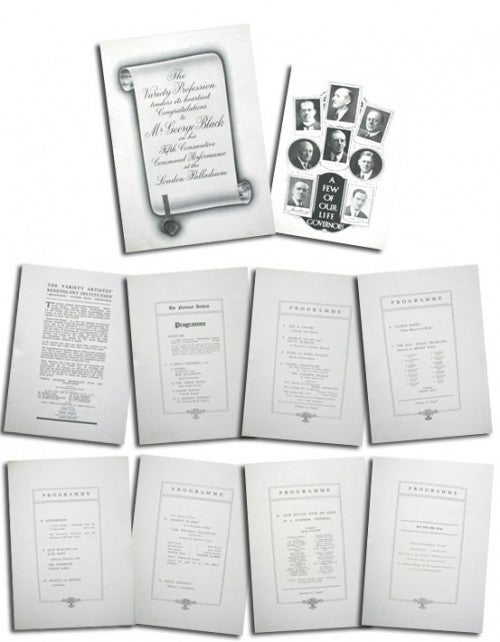