The EABF has always enjoyed productive and mutually beneficial relationships with other fund-raising organisations within the entertainment arena. One such is The Heritage Foundation, formerly Comic Heritage, which erects blue plaques to honour late entertainers on their former homes or places of work. Funds for good causes are raised by hosting celebrity lunches featuring auctions of memorabilia following plaque unveilings. 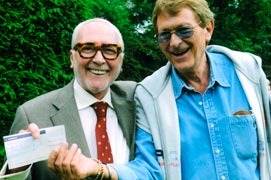 The EABF’s Brinsworth House in Twickenham is home to several of these plaques, which are dedicated to former residents including Dame Thora Hird, Alan ‘Fluff’ Freeman MBE and Charles Drake.